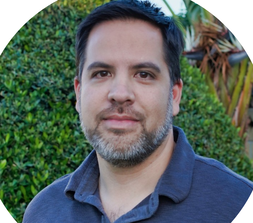 Kevin Lyons has spent plenty of time both in front of and behind the camera.  He has extensive experience working in Radio, Television, and Film as a Cinematographer, Producer, Editor, Graphic Designer, Audio Visual Engineer and Web Developer.  He has worked with several fortune 500 companies, including Pepsi, The Truth, Verizon, T-Mobile, Iomega and more in PR and marketing.  He is also a certified AVID Media Composer Instructor.
Kevin started making movies in 2001.  He has won a CINE Golden Eagle Award and Telly Award for Cinematography and Video Editing.
In 2006, Kevin started his own production company, LyonsDenPro. Over the years, it has grown a substantial network of clients across the nation.
In 2019 he  produced the Inland Empire 48 Film Project, sponsored by San Bernardino Valley College’s Film, TV, and Media Program and Institute of Media Arts. Through the use of remote viewing technology, he was able to keep the Project alive in 2020 in spite of the Corona-19 Virus Pandemic.
In addition to running LyonsDenPro, Kevin is currently serving as an Adjunct Professor at San Bernardino Valley College of the Desert where he teaches several film production classes including Intro to Film, Cinematography, and Film and Studio Production.  He holds a BA in mass communication from California State University, San Bernardino and is currently pursuing an MFA in Screenwriting at CSUF.
SOURCES:  ​Linkedin, Facebook
CONTACT:
IMDB:  ?
​PROJECTS: